As someone was pointing out in The Age the other day, this city sure loves a festival. Pick any time of the year at random and you can be sure that a festival of some kind will be taking place at that very moment. Just as some world cities are on a permanently heightened terrorism threat status, Melbourne seems to be on perpetual risk of festival. Careful where you stand now–some culture might break out at any time.

Clearly we have neither the time nor finances to attend them all–you’d literally never stop–but every now and again we somehow find ourselves at a disproportionate number of events attached to a particular one. A few years ago it was the comedy festival; another year we binged on short film at the St Kilda Film Festival, and this year we ended up “doing” the Melbourne Writers Festival.

Somewhat surprisingly, every time I would mention to someone that we were seeing the festival’s big international name, Jonathan Franzen, in conversation at the beautiful BMW Edge theatre in Fed Square, I was mostly met with only blank stares (seriously? He wrote The Corrections! He said no to Oprah! He’s, like, really famous…) Well, I’m a big fan whether you’ve heard of him or not, and although I still haven’t found the time to read Freedom (the curse of walking to work means that I’ve lost my novel reading time), I’ve read everything else. He was an entertaining and articulate speaker and the hour flew by. Even the audience Q&A segment (which can sometimes be excrutiating) was very entertaining. I particularly enjoyed Jonathan’s rather endearing habit of pausing to think before answering a question. Clearly this is a man who does not fear an uncomfortable silence. Maybe I’ll start adopting this strategy in job interviews. Or maybe not.

The following night we were back in Fed Square to see the live recording of the ABC’s Q&A (the Aussie version of question time), hosted by the always entertaining Tony Jones–a sort of cross between Dimbleby and a slightly friendlier Paxman. As the producer assured us before it kicked off, it really is live–not for them the luxury of a 10 second delay. Perhaps one might have come in handy, though, judging by the fact that they accidentally put this to air:

That was supposed to be a short pre-show promo in which Tony Jones introduces the panel, but unfortunately someone put the audio feed live just early enough for the unfortunate punchline to the warm up guy’s joke (“…85 year old Sudanese woman”) to be broadcast to Australia’s living rooms. I can’t imagine what people at home must have thought (the setup that they didn’t hear was something along the lines that the makeup artists who were at that moment dabbing foundation on the panel are so good that underneath it all Tony Jones is actually that aforementioned 85 year old Sudanese woman…)

Still, all of that did mean that I made my second appearance on Aussie telly: many years ago I randomly switched on Channel Ten to see my stupid laughing head in the audience of that year’s Melbourne Comedy Festival Gala. This time with the aid of the pause button, a bit of Where’s Wally type fun backed up with the knowledge of exactly where I was sitting and what I was wearing I was able to locate myself in the crowd pulling a stupid face. Between the two of us we’ve now appeared on three of the five terrestrial channels–Sal was with a group of girls interviewed by Channel 7 at Flemington many years ago–so that just leaves Nine and SBS. I wonder if we can make it onto the other two? Channel Nine is probably achievable if I hang around on Dorcas Street in South Melbourne for long enough in October while they’re filming the next series of The Block, but SBS could be tricky: I guess I’d either have to go on Countdown or get my kit off…

Our third writers festival event in as many days was an evening of foodie indulgence at the new Vue de Monde up the top of the Rialto tower in the company of chef and owner Shannon Bennett talking about his new guide to New York. It was enough to make me really want to go back to New York–just a shame it’s not quite as accessible from here as it was from London. Still, a lovely evening with some great food and wine. We even got to shake the man’s hand as he signed our book for us. 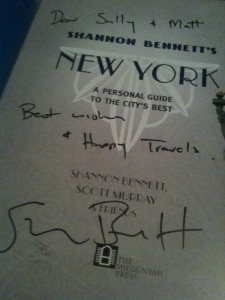