Flicking through The Age as I chewed on my lunchtime sandwich yesterday, this article, about car thefts in Victoria, caught my eye: 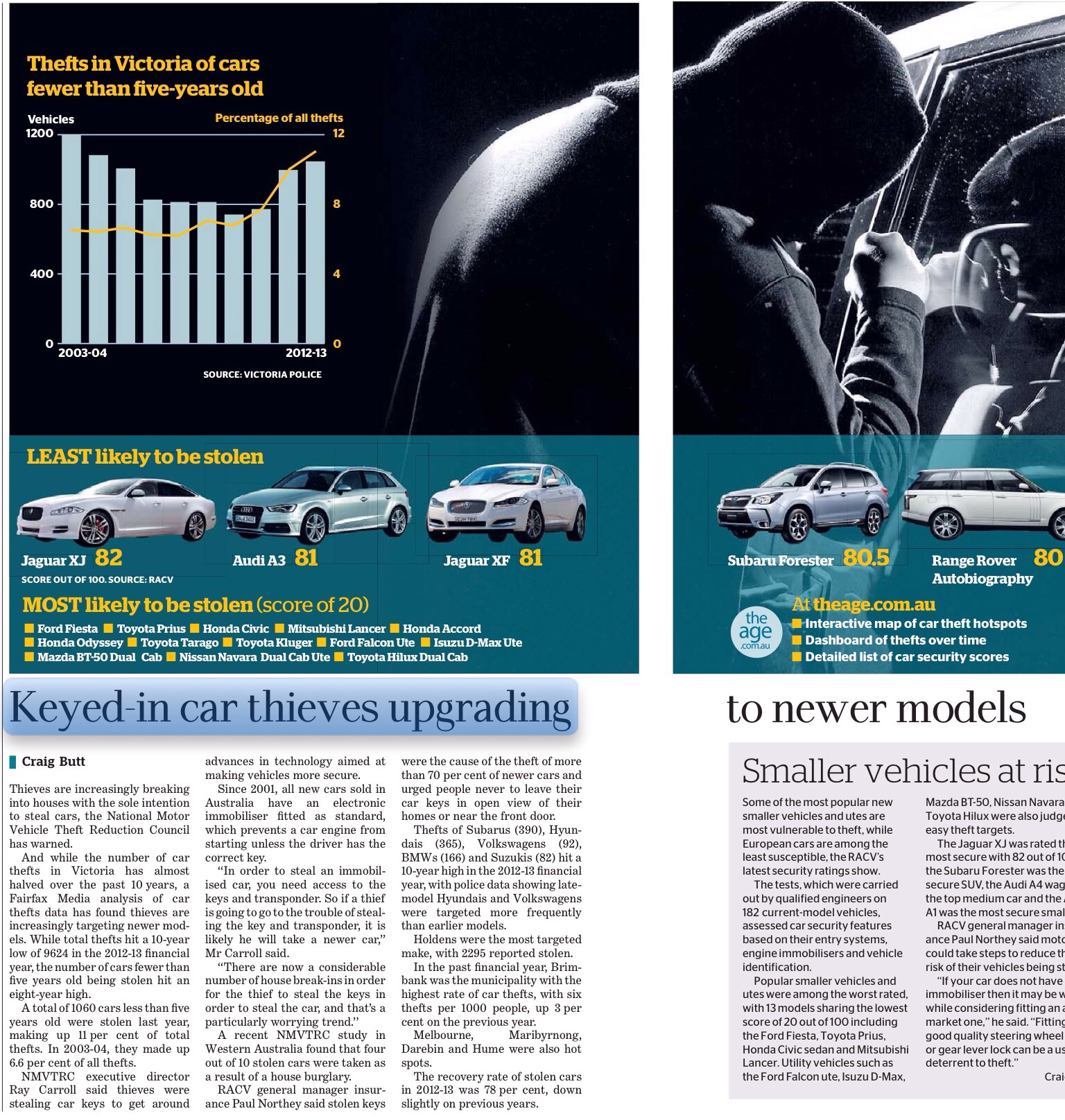 While total thefts hit a 10-year low of 9624 in the 2012-13 financial year, the number of cars fewer than five years old being stolen hit an eight-year high

If ever you wanted an illustration that good news does not sell papers, then here it is.

Who cares about the good news that car thefts are at an all time low, when there’s a scare story about thieves breaking into houses to steal car keys to write instead?

To be fair, the online version of the article does include this graph (not shown by default, but it’s there if you bother to click through to it) showing the downward trend in car thefts over the last ten years: 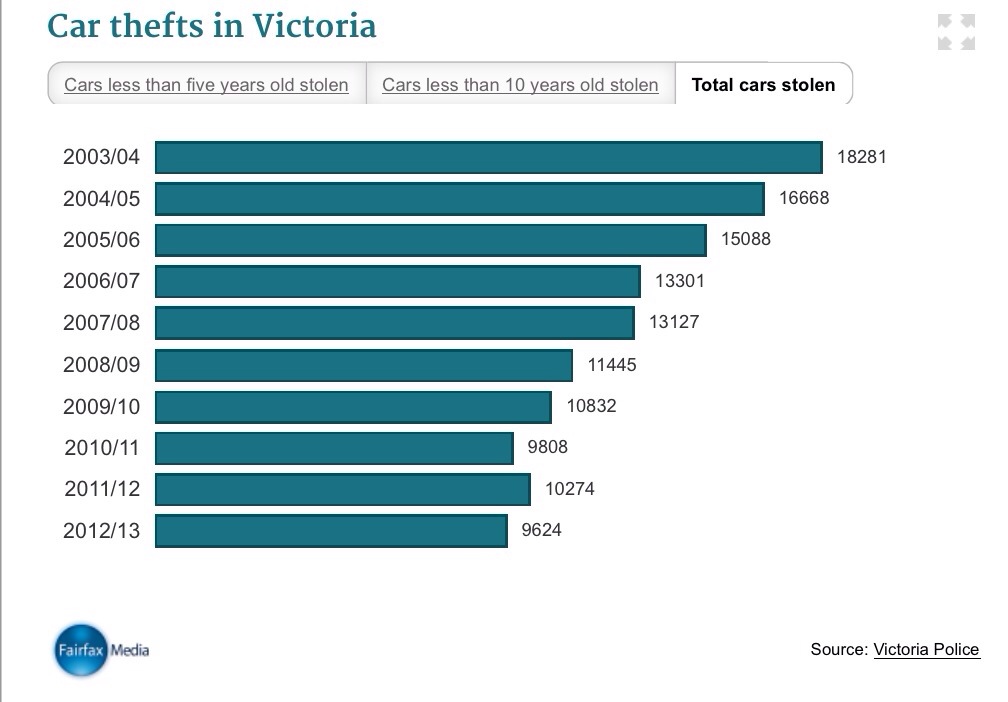 It’s even more significant in real terms if you consider that the total number of vehicles on the road has increased over that time (the ABS recorded an 11% increase in vehicles registered in Victoria since 2008 alone). So at a time when we have more vehicles on the road than ever before, we also have a massive decrease in the numbers of thefts.

This raises some interesting questions: Why has this happened? Has there been a change in police policy? Is it a societal change? Are thieves just stealing other things instead? Are modern cars getting harder to steal (unless you’ve managed to nick the keys)?

But instead of asking any of those questions, the Age chooses to build an article around the fact that in the last twelve months the number of cars under five years old that were stolen rose by… wait for it… 53: 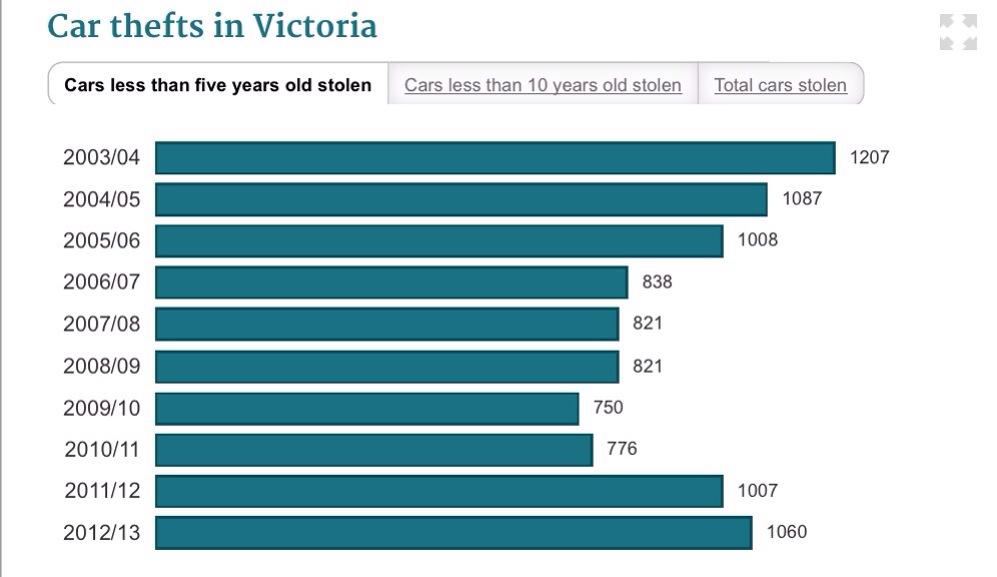 While it certainly looks like thefts of newer cars — after falling for a number of years — seem to be trending up again (from 6.6% of all thefts in 2003-04 to 11%) that’s still only a slighter bigger proportion of a much smaller total.

(I did wonder if this could be explained due to a change in the proportion of newer cars out there. The article doesn’t mention it, but these stats are clearly pretty meaningless without that information, but I checked, and according to figures in table nine in this annual report from the ABS, and the corresponding tables from previous years, the number of registered vehicles under five years old looks to have remained pretty constant over the last few years, at about 30% of all registered vehicles.)

On the other hand, elsewhere in the article, we have gems like this:

Holdens were the most targeted make, with 2295 reported stolen.

The most targeted make? Isn’t it also possible that, as Holden was Australia’s best selling brand of car for many years, there’s simply more of them to steal?

And are late model Hyundais and VWs “targeted more frequently” because more of them have been sold in the last few years?

Well, here’s some more ABS statistics to shed some light on it: 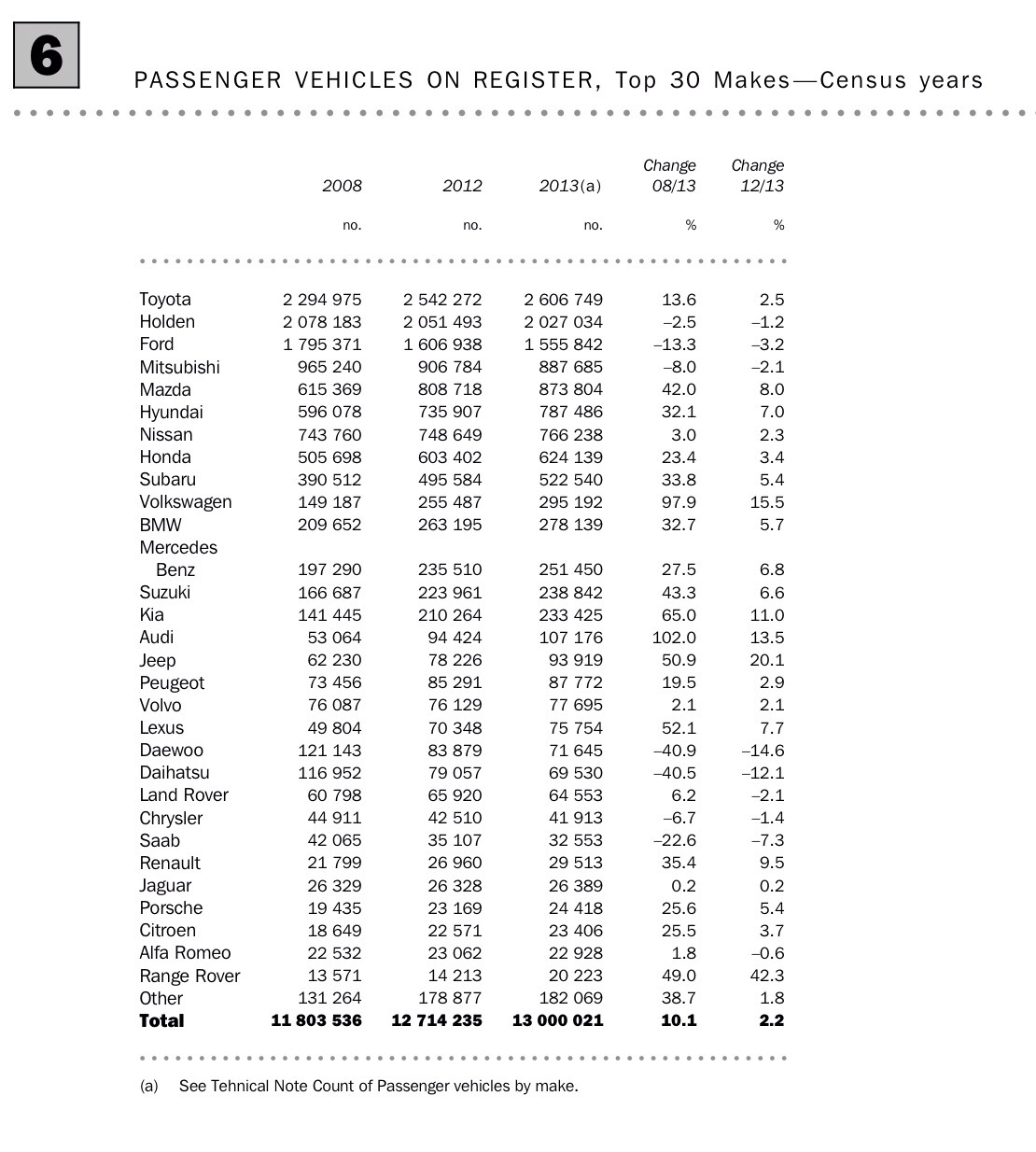 I couldn’t find figures for Victoria alone, so we’ll have to make do with these Australia-wide ones, but with a 98% increase in the number of VWs and a 32% increase in Hyundais on the roads over the last five years, it’s hardly surprising that thefts of “late models” are at all time highs. They didn’t sell anywhere near as many of those cars 5 years ago as they do today. There’s many, many more “late models” of those on the roads than older ones.

Look! Here’s a chart that shows how Jaguars are massively more secure cars than Holdens… 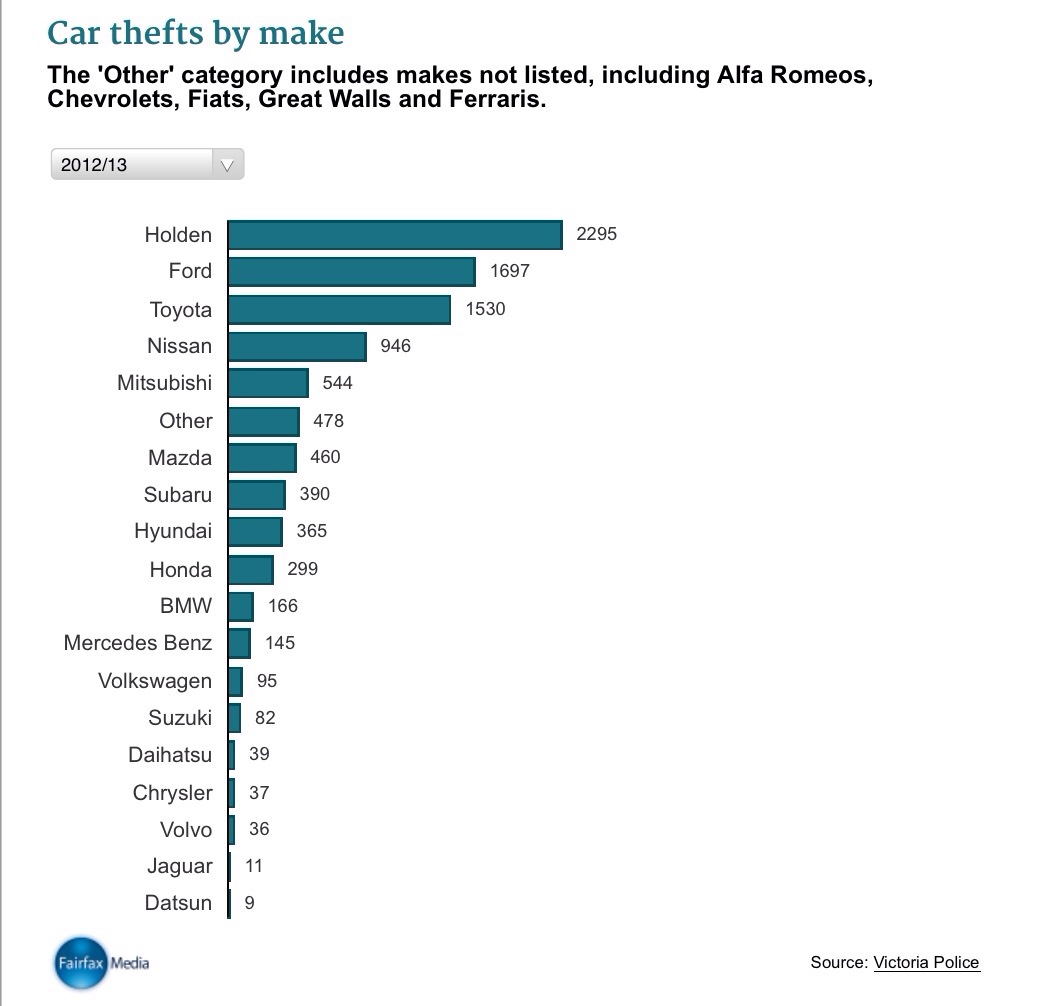 Just kidding. Of course it doesn’t show that at all, but unless you give me these figures as a proportion of the number of each make that are out in the wild, then the entire chart is just as meaningless.

Only then can we see which ones are “targeted” (if any). For example, I wonder why — based on those Australia wide stats — Toyotas only come in third on the thefts list when there appear to be more of them than any other car?

As it stands, The Age, all you’ve really demonstrated is that broadly speaking if there are more of a particular type of car on the roads, then more of them get stolen.

Next week in The Age’s Data Journalism column, a series of graphs exploring the defecatory habits of large furry mammals, and a companion piece on papal religious persuasion through the ages.

UPDATE (5/02): I was joking about the whole bears/pope thing, but imagine my amusement over lunch today when I found the next article from The Age’s Data Journalism unit. Ground-breaking research across a two page spread revealed that people in Melbourne quite like sport and shopping but hate commuting. Wow. Just wow.