So asked the giant green letters scrolling across the roof of Melbourne’s oddly shaped, boxing ring slash gig venue Festival Hall on Friday night, shortly before Jarvis and his reformed Pulp took to the stage to ask the same question in song form.

Well yes, Jarvis, I do actually. For me it was the 23rd February 1996 (15 years ago–gosh does that make me feel old…) half a lifetime ago on the other side of the world, in what was then the Manchester Nynex Arena, although to this day I’m not entirely sure who Nynex were, and why they were ever sponsoring a music venue in Manchester. This of course was in the days following that little incident at the Brits (Jarv was even interviewed from his dressing room before the Manchester gig by Chris Evans for TFI Friday).

Pulp are one of those bands that I really never thought I would see live again: even when they announced they were reforming to play the Isle of Wight, not to mention Wireless and that surprise Glasto set, all of which we narrowly avoided on our recent trip home, I thought I’d missed my chance.

There’s been some water under the bridge for the band as well as me in the intervening 15 years, but their set on Friday was remarkably similar to the one I saw them play in Manchester, and Jarvis was on good form, at least once he got his shoes sorted: after Do You Remember The First Time? he called back to the stage crew for a change of footwear, blaming the slippy Festival Hall stage. “They’re not orthopaedics”, he reassured us in his Sheffield deadpan as he put his new shoes on, before giving them a little try and announcing “oh yeah, you’re in for a show now…”

And we certainly were. Sadly they apparently played their last ever Australian show at Splendour last night, but I’m glad I was there for this one. 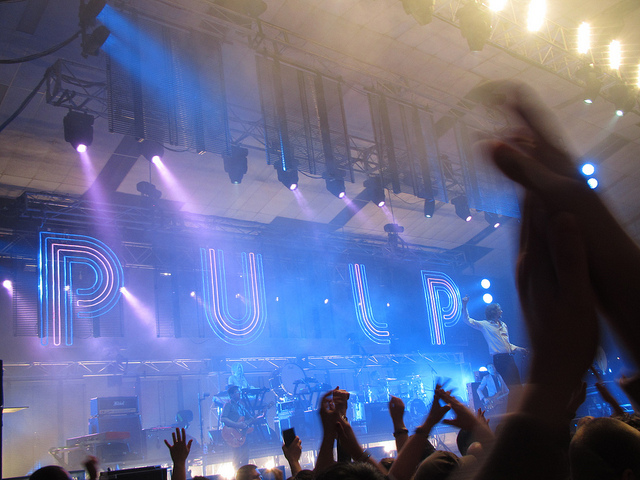